Throughout 2021, in celebration of the 100th anniversary of the Dentzel Carousel at Glen Echo Park, Montgomery History partnered with the Glen Echo Park Partnership for Arts and Culture to help present a four-part lecture series surrounding the story of this unique piece of local history. Check out the series below!

Check out a behind-the-scenes tour and history of the carousel with National Park Service Ranger Kevin Patti: 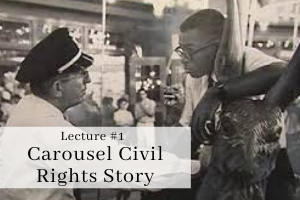 In 1960, three years before the March on Washington, a group of radicalized Howard University students climbed aboard the backs of gilded horsed on Glen Echo Amusement Park’s Dentzel carousel. Since the turn of the century, Glen Echo Amusement Park had been the DC metro area’s premiere recreation destination, it’s advertising jingle the soundtrack to summer. But the park was whites only, and the Black students were arrested. This sit-in on the carousel set off nine weeks pickets and arrests, most remarkable because the Howard students were immediately joined by a neighboring white community of union organizers and progressive civil servants. Never before had a white community collaborated with a Black student group, and never before had the American Nazi Party counter-protested publicly. This unknown story and its ramifications is the subject of Emmy Award winning filmmaker Ilana Trachtman’s documentary-in-progress, Ain’t No Back to a Merry-Go-Round. Join us as Ilana introduces us to a few of the remarkable, “ordinary” individuals who stood up to injustice the summer of 1960, encountering the “other” for the very first time and also discovering the impulse to activism inside themselves. Ilana will share scenes from the film in progress, discuss the relevance of this unprecedented collaboration, and invite questions. 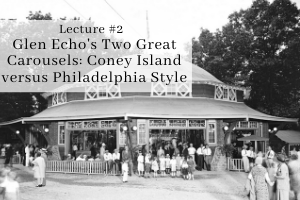 Before Glen Echo’s wonderful W. H. Dentzel carousel was delivered from Philadelphia in 1921, the park featured a large carousel created in Coney Island by W. F. Mangels with horses and chariots by M. C. Illions. This presentation will consider why each of the carousels was purchased, compare the regional styles of the two manufacturers, introduce the men who carved and built the two carousels, and show how W. H. Dentzel recycled elements from the Glen Echo Mangels carousel into a “new” carousel in 1922. 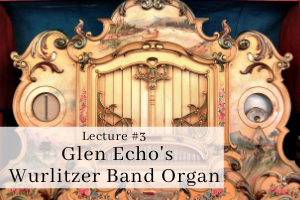 The restorer and caretaker of the organ for the last 50 years will talk about the history of the organ at the Park, its modifications, restoration and maintenance.  A rear view of the organ’s mechanism will be described and shown in operation. 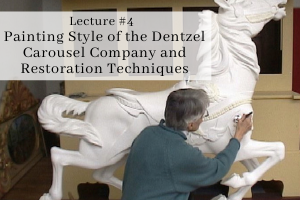 Rosa Patton has been restoring carousels for 43 years, including the 20-year restoration of Glen Echo’s carousel. She will discuss the painting style differences between carousel manufacturers, the types of paints used, and the tools and brushes used for achieving the signature look of each company. She will also give a painting technique demonstration to show how the company’s artists worked and how these techniques were used during the carousel’s restoration.